Tough-Seal has the heat resistance and service temperature of an epoxy potting compound, the flexibility common to urethanes, and the durable encapsulating protection of a silicone, all in just one potting compound. Tough-Seal is a hybrid epoxy elastomer and possesses the resilience of an elastomeric matrix.

Tough-Seal is not a urethane so it is isocyanate-free and is not moisture sensitive. It is superior to ordinary urethane and epoxy potting compounds. Thermal potting compounds & encapsulants are specified to flow over an electrical device and fill up a housing with a hardened thermoset plastic to serve as an environmental barrier.


Epoxy, urethane and silicone potting materials are prevalent throughout industry because they suitably withstand intrusive environmental moisture, salts and chemicals that can attack sensitive electronics and cause shorts.


Ordinary epoxy materials can handle the high service temperatures but they are vulnerable to pull back from the housing in cold conditions to create gaps that are readily exploited by the aggressive environment. Tough-Seal takes the heat and won’t pull back!

Chemistry aside, Tough-Seal is bulldog tough and grips the wall in cold when others contract to expose a gap, yet it won’t wilt under the heat. Tough-Seal picks up where urethanes leave off to guard electrical components up to 300°F.

Tough-Seal Goes from Zero to Hero

Electrical components are subjected to stress when they are embedded in a potting compound. It is the principle cause of component failure even when an impermeable seal to the environment is attained.


The sensitive components can be dislodged from their connections when the potting compound hardens from a liquid to a solid and later when the part is exposed to thermal cycling and the persistent expansion and contraction of the encapsulant.

Tough-Seal avoids initial embedment stress upon cure because it has imperceptibly low shrinkage. Thermoset plastics, such as epoxies and urethanes, have a slightly larger volume in their freshly mixed liquid state than they possess in their hardened cured state.


This differential volume is manifest by shrinkage upon cure and is aggravated by the size of the pour and the extent of the resulting exotherm. The higher service temperature traditional epoxy system essentially squeezes the components that it is designed to protect right off the board. More flexible urethane systems shrink less and are more compliant than typical epoxies but they are not recommended for the service temperatures encountered in under-the-hood automotive service. Moreover, as is indicated later, flexible urethane systems become hard in the cold extremes of thermal cycles and they induce stress post-potting.
The novel, hybridized nature of Tough-Seal has little to no shrinkage upon cure per ASTM D2256 and it cures with minimal to no exotherm even in large pours. 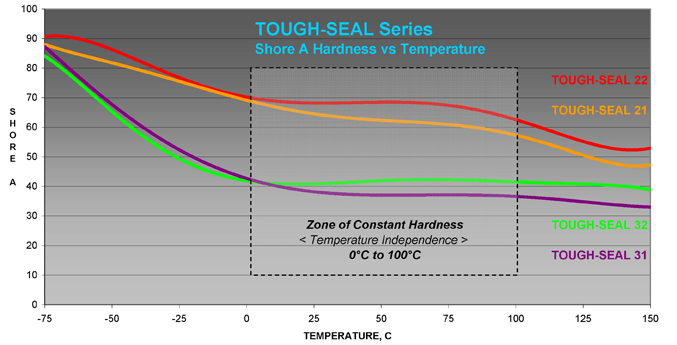 Why does Tough-Seal have superior thermal cycling characteristics? Unlike electronics suffer from the detrimental thermal cycling effects as these materials harden, embrittle and shrink more in the cold and become softer, permeable and expand as they are heated. In the graph below, the hardness of Tough-Seal is nearly constant across a wide temperature range. In this Tough-Seal “Zone of Constant Hardness” , destructive expansion and contraction forces are minimized and they do not act on embedded circuitry. Thermal cycling resistance improves.

Tough-Seal Can Save the Day


Is your project nearly complete with your launch date fast approaching but you’re getting hammered on environmental testing with your existing encapsulant? You thought the hard part was over with all design reviews signed off except the potting compound selection and now the specification of the thermal potting compound is the only thing standing between you and success. Your electronic design is high tech, why not go with the latest technology in polymer encapsulation? 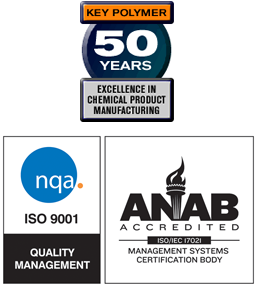